How To Write A Script For Your Animated Explainer Video?

11 Jan How To Write A Script For Your Animated Explainer Video?

How To Write A Script For Your Animated Explainer Video? 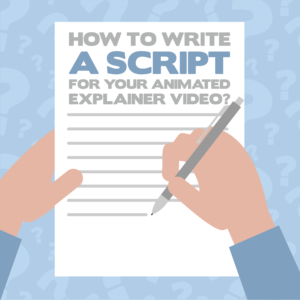 The script’s length will often depend on your audience. An audience that’s captive in an auditorium endures about 6-8 minutes before they start to drift. However, for online surfers, they tend to check out after 2-4 minutes depending on how compelling the material is and whether she or he really needs the product you are offering.

You have learned that an animated video explainer should be short to deliver the idea of your business directly and quickly so that your audience will steer clear of the boredom world. There’s another piece of advice aside from that and your video should be simple. Never explain everything about your company in a single two-minute-long script. You should be straight to the point and take some time about what is essential to include in your video and what is not.

Generally, the most important thing to bear in mind with an animated explainer video should always be your audience as well as how you can help them solve their issues. Never try selling your audience anything, but instead, let them understand that you can help them, only then will they trust in your brand and decide to buy your service or product. If the video talks about the features of the brand and overlooks the problems of the audience, you might also lose tons of conversion opportunities.

Imagine your customers in mind when choosing the right tone for your animated explainer video. Write a sentence summary that describes why you’re making the video and what you wish your viewers to do at the end of it. This will help you find a tone that will perfectly blend on your video. If you are considering story-driven characters, imagine the real people as mental place-holders. It is much simpler to write a realistic dialogue if you’re writing for somebody whose mannerisms and habits you know well. Your chosen tone for your video will drive your choice of narrator, setting, type and pace of dialogue for the script.

Majority of the scripts for animated explainer videos present a problem, provide a solution, explain how it is beneficial, and drive the viewers to action. Definitions, statistics, and dry facts are okay inside the classroom, yet as much as possible get rid of lifeless content. You should use the screen’s power to show your audience real people that your company helped and the services or benefits have bestowed on your clients.

Other than those mentioned tips above, never forget an effective call to action in your animated explainer video as this can make a difference.