What types of explainer video exists?

What types of explainer video exists?

We’ve all come across at least one in our lives, the hottest and the most effective tool for internet marketing, an explainer video. Lasting a minute or two long, this video which is often animated, highlights your product, services or brand that you are marketing. In the 21st century, everyone is pressed for time and thus want things to be dealt with swiftly, they don’t have time to read long product descriptions and such, therefore they want something that is to the point, that delivers the whole message quickly without any unnecessary clutter. That is where explainer videos come in because they do all the things the audience wants. 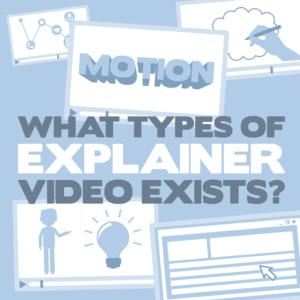 The simplest type of explainer video is the Screencast Video. These are the low budget but equally effective variant of the explainer video, this is simply screen capture footage showcasing how the product actually works in real time, and is used for software and such. These are more the educational type rather than brand promotion and that’s why these are a bit longer than most explainer videos, going to about five minutes.

The second is the most common and popular explainer videos. Usually it features a cartoon character who has an unsolvable problem, and the product is the answer which shows up to save the day. One common strategy with these kind of videos is to represent your target audience through that character. That way, the audience can relate to the content better. Usually the animation is 2d.

The third kind is the whiteboard animation, which features a recording of the animation being drawn on the whiteboard. A first it actually featured a time lapsed footage of drawings on the whiteboard being created, recorded through a camera, but nowadays all this is done digitally. It is extremely engaging and has a bit of an educational approach, as the audience gets to see the content being created before their eyes.

Next up we have something known as motion graphics. Like the name suggests, it features graphics which are in motion, which use colors and shapes to convey messages which are otherwise not possible to convey using some other medium. Businesses with more serious profiles employ this variant of the explainer video. Sometimes motion graphics use 3d graphics to convey the message, this type of animation is used to describe new innovations, technology, software, etc.

Cartoons with motion graphics is by far the single most popular explainer video kind, combining elements from both techniques, it features cartoon characters which lead the story while the graphics attempt to convey abstract ideas. You get the best of both worlds with this approach.

Stop motion is the oldest kind of explainer video out there, using still photographs or frames played in quick succession, it is used to convey messages of the sentimental nature to the audience. These take the most time and money to produce, but generally give the equal amount of result.

And lastly, we have 3d animation. Possibilities are endless with 3d animation, as you can animate it to anything and everything. You’re only limited by your imagination.