Why Use Characters In Your Animated Video Project?

06 Mar Why Use Characters In Your Animated Video Project?

Why Use Characters In Your Animated Video Project?

By now, you have probably seen a lot of animated marketing videos online, those videos explaining business ideas in a few seconds, using attractive and cute animation. But, did you ever wonder why they are using characters in the first place?

Well, just so you know, they were not used by chance. Marketers who are in charge of the video making process don’t use every asset at random, including the characters.

How do you benefit from the use of characters in your animated video project then? 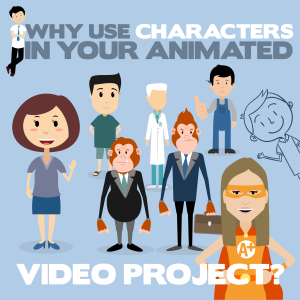 Having a main characters mean having a story to share and tell. Any animated character always got some story behind it together with the problems it needs to conquer. Storytelling is very compelling and powerful and this is the reason why it has been used through the years to teach new things, advertise easier and create amazing scripts for motion pictures.

It is important to generate empathy to engage with all audiences. This makes people become engrossed with your video’s story and make them curious as to how the character will solve the problem at hand.

There are times when the video’s main characters don’t look like your target audience at all but how they wish to look like instead. It is an aged trick in advertising with the character in the advertisement representing all the things the target audience wishes to become and they can only fulfill these wishes when they purchase the right service or product.

The main character in an animated video can generate a plethora of emotions in their viewers, from happiness to trustworthiness to the most intimate desires and hopes. Also an amazing benefit of animated characters is that by using them, the powerful emotions become attached to the brand which made the video.

Thus, animated characters improve your branding through giving your company a positive mood as viewers spend more time watching the video and becoming emotionally closer to the characters.

It is imperative to be extra careful on how your characters are going to look like. They should resemble your audience for them to feel that the characters are their representation. When your characters have their same age, gender, skin tone and even dress the way they do, they will know right away that the video is made for them, making your characters look more compelling and attractive to their eyes.

You see, characters are not used in animated videos for no reason. They are the one responsible mostly for the success of every marketing effort so make sure you use them to your advantage.